I have been privileged this week to learn from some of the greatest leaders in the anti-human trafficking movement!  Cecil Flores-Oebanda is known as an international expert on human trafficking and she has taken me under her wing.  I spent a week in her shelter with incredible staff members and inspiring survivors!

I would imagine that there are some reading who are very curious about the stories of the survivors and I am happy to share, but I feel the need to first express a lesson I learned as a teenager.

There were people I cared dearly about who struggled with addictions of different kinds and as a 19 year-old, I decided that I wanted to attend the 12 step program to help them.  I learned quickly that by focusing on their problems and talking to others about those problems, I was not fixing anything.  I was asked by a leader there to focus on myself and to find something that I could improve on and use the 12 steps to make myself better.  I chose to focus on my weakness of gossiping.  I loved hearing crazy stories and telling other people to see their reactions.  A year later I completed the 12 steps and was truly enlightened!  Gossiping is destructive, unhelpful and exploitative.  You cannot help someone if you are using their stories as gossip.  In turn, telling information to help or get help for someone is at times necessary and can change lives for the better.  As you read about these survivors please keep in mind how you can use these stories to make a difference.

Currently, The Center of Hope houses 47 survivors, ranging from 2 to 25 years old.  Some are from healthy families, others from broken homes or born into poverty.  A few were rescued during the manipulation stage and were saved from exploitation, some were sold by family members and others by friends or acquaintances. Some were prostituted in bars, others out of their homes.  One was sold to a foreigner as a young bride/object of torture, some were hired as maids, locally and abroad, and then abused.   The great majority of the survivors were exploited online to create pornography of one kind or another.  Their stories obviously are deeper and more complex and while few carry visible scars of the abuse, others are much less visible.  Every one of these girls who was exploited was physically, emotionally, socially and psychologically damaged.  Some of these girls have been there for 2 weeks and others for many years, waiting for justice, hoping that the future has better things to offer.

All of the girls that I was able to  spend time with, left a huge imprint on my heart.  One of those is named Rose.  She gave me permission to use her real name and story and I believe it is one that we all need to know.  Rose was first sold into prostitution at the age of 12.  She lived in that hell for 2 years.  She was sold to countless boys and men for her pain and their pleasure.  As a survival technique she chose to believe that she was so used, so broken, there was no other option for her life.  One of her regular customers was a local police officer who finally decided to report her case.  Keep in mind that only a few years back the consequence for someone who paid for sex was 6 months of community service.  Thankfully enough advocates fought to change that law and the consequence is now 40 years to life for anyone who pays for sex with a minor.

Rose was brought to The Center of Hope at the age of 14 for refuge and healing and she was angry!  She had been manipulated, lied to, groomed and controlled for so long that she believed that she was only worth what men paid her and was too broken to do anything else.  The social workers, psychologist and teachers gave her every tool to be successful and for years she refused the help.  She remained focused on her past, bitter, angry and depressed.  After 2 to 3 years in the shelter she decided to change her perspective and start focusing on the future.  She realized that she had to choose what her life would be like outside of the shelter and she started to accept the help of those around her.  Her new perspective allowed her to accept that she was being helped and empowered her to study and prepare for the future.  She left the shelter at the age of 18 and was assisted by International Justice Mission to find housing.  She was able to find a part time job and go to college.  As you can imagine, it was soul stretching but she never gave up.  Those who had supported her in the shelter have never left her side.  She graduated from college as an Elementary School Teacher and returned to the shelter to educate survivors.  She is an inspiration to them.  She reminds them that she knows what they are suffering.  She allows them to choose whether to study or not, whether to accept help or not and she inspires them with her successes.  I am also inspired by Rose and know that survivor-advocates are so powerful and so needed! Rose was hopeless on her own, but with a group of advocates who never gave up on her she was able to build a successful life and is now inspiring many others.

One piece of her story is an important lesson in itself.  The police officer was her abuser and also the man who saved her.  I realized more clearly this week that everyone is vulnerable to be abused and everyone is vulnerable to support the side of darkness.  This is not clearly good people vs. evil people.  There are decent people who contribute to the side of darkness by watching pornography, sexting and even buying and selling humans.  Most do not understand the effects of their actions.  Most think they are choosing a higher path.  We cannot fight this evil by demonizing the perpetrators or those creating the demand.  We fight by focusing on our own hearts, our own ability to bring light to the world.  Just as I learned as a 19 year-old to focus on bettering myself through the 12 steps order to help others, we all can focus on what we have to give.  We can look at our gifts, talents and even past trials to know where we can shine.  Vulnerability opens the windows of our hearts to allow our light to shine.  Let’s all join our light to fight the darkness.  In joining, we gain new light from others and they from us and we are able to shine brighter to reach further.

We chose the name of Lighthouse Sanctuary because we know that “Brightly beams our father’s mercy from his lighthouse evermore and to us he gives the keeping of the lights along the shore.”  The darkness that these survivors have suffered is as dark as it gets, but light ALWAYS outshines the darkness! Please join Lighthouse Sanctuary by becoming an advocate for victims of human trafficking.  Please mark your calendars for October 27th for our first gala in Utah to spread awareness and raise the funds needed for our shelter to be a long-term success.  More details to come.  If you would like to volunteer your talents to make our first gala a success, we would love your help.  Please email me.  julie@lighthousesanctuary.org 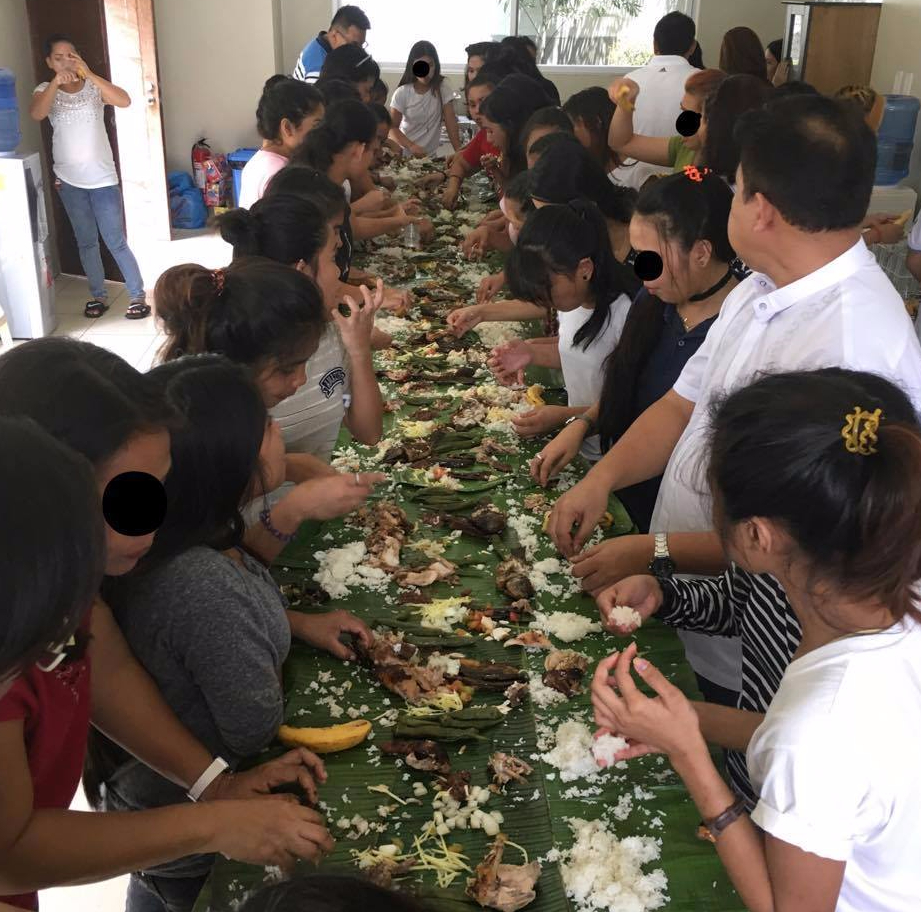 Boodle fight (Philippine traditonal feast) with the staff and survivors of the Center of Hope.