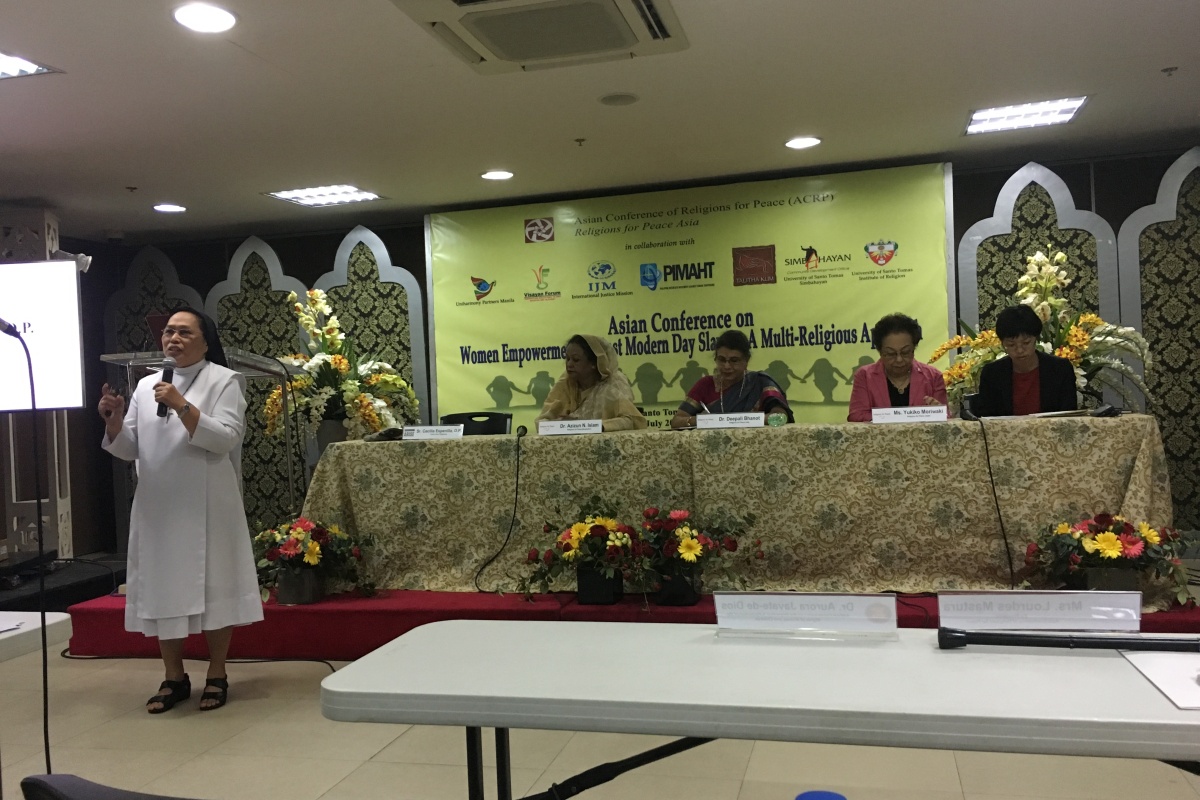 My mind won’t stop spinning after I attended a conference on women empowerment against modern day slavery with a multi-religious approach.  I sat among pastors, reverends, doctors of religions, nuns, missionaries and many other faith-filled women as well as a few men.  We discussed what modern day slavery is and how it manifests itself in different nations and what is being done to combat it.  We discussed our role as women and people of faith, in the anti-human trafficking movement.  And finally, we discussed how we could work together to eradicate it.

I heard repeated the idea that it was through education and our faith that we could fight.  What a beautiful place to be sitting and see people from many different religions agreeing that we could all help our fellow men live their religion better!  I loved seeing the respect between each sect and the desire we all had to fight the same fight against the adversary!

Something became very clear to me during the conference and that is that religion done right is a beautiful thing!  It gives hope and perspective, it facilitates healing and personal growth.  It is the key to helping the survivors of human trafficking to hold on to hope and find a way in this crazy world.  It is the reason that people like me leave their comfortable lives to serve those suffering.

There’s always a flip side though.  Religion done wrong is what causes such epidemics as human trafficking.  On the extreme end there are religions who traffic young boys into their regimes and traffic girls for their personal sex slaves.  There are religions that degrade women and force young girls to marry, adding to the problem.  For most of us, these ideas are very foreign and nothing we need to stress about, but there is another twist on religion, seen everyday, that has caused the exploitation of women to flourish.  It is that of living religion in ignorance and fear.

All too often our young people are being exposed to pornography and do not know how to talk about it with someone who can help them understand it and deal with the images seen.  If those young people are too afraid to get help they generally end up addicted.  Many who come from religious families have been taught not to have sex before marriage, which then becomes the justification for watching pornography.  When we live a principle of faith because of fear there are always underlying consequences.

Pornography is the root demand for sex slavery.  Most videos shown on the internet are of women who have been abused and conned into believing that their sex appeal is the source of their value.  Many videos are made of young girls being exploited on camera and many of those who have made pornography are plagued with  STD’s and PTSDs. Watching pornography fuels the demand for sex abuse and slavery.  Every click puts another woman or child in danger!

Education and faith combined are what will eradicate slavery.  We have to stop shaming, gossiping and looking down on others for their choices.  We cannot teach religion through fear or a series of dos and don’ts but rather through love, example and education.  Faith comes from a desire to believe in a higher power and grows as we follow what we believe to be true.  Faith helps us to bridle our passions and love more purely.  Education about human trafficking combined with faith will help stop the demand as well as help heal the broken.

Please join the cause by learning more about human trafficking and whatever faith you follow, allow it to lead you to love, empowerment and happiness!